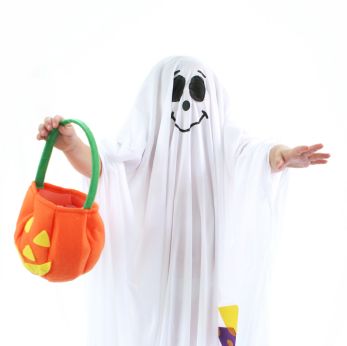 I Ain't 'fraid of no Ghost!

There is a lot of interest in ghosts. There are more and more “reality” television shows purporting to be investigating the truth about ghosts. If we really want to know the truth, our starting point shouldn’t be the TV we watch, the stories we hear, or people’s opinions. Our starting point should be the Word of God. So what does the Bible have to say?

First, the Bible gives no indication that people’s spirits can just hang around after death. For example, Hebrews 9:27 says, “…people are destined to die once, and after that to face judgment.”

What about after that? Can people return from heaven or hell? A good place to start is the account of the Rich Man and Lazarus in Luke 16:19-31. It should be noted that there is disagreement over whether this account describes actual events or is a parable. I think there are good reasons to believe that Jesus was recounting events that actually happened. However, for our purposes here, it doesn’t really matter. Whether or not the account is a parable, it is reasonable to assume that Jesus’ words accurately reflect the way things work in the afterlife.

Jesus tells about two people, an unnamed rich man, and a beggar named Lazarus. (This is a different man than the one of the same name that Jesus raised from the dead in John 11.) Lazarus went to paradise, while the rich man was tormented in Hades. The rich man wanted to return and warn his family so they wouldn’t end up where he was. However, because he could not, he asked if Lazarus could return to warn them. Abraham neither confirmed or denied that it was possible for Lazarus to return, but merely pointed out that it would do no good.

It seems clear that the “unrighteous dead”* can’t return. And, really, this is just common sense. If hell had an exit door, it would be empty.

But what about the “righteous dead?”* Well, that’s not quite as simple to answer. In 1 Samuel 28, King Saul asks a medium to contact Samuel from beyond the grave. It appears to work, as the medium sees a spirit that she and Saul believe to be Samuel, and receive a message of judgment.

So, did Samuel really return from the dead? The answer to that is not as clear as it might first appear. The passage does seem to confirm that the medium really did see something. There is a great deal of debate as to whether this was actually Samuel, or a demon impersonating him. I don’t think it is possible to conclusively say either way.

The Bible tells us that mediums don’t really have the ability to contact the dead. (See Isaiah 8:19, for example.) So, if Samuel did return, it wasn’t because of any special power that the medium possessed. Instead, it was an act of God.

In conclusion, it is clear that the popular idea of people’s spirits can remain on earth as ghosts has no basis in reality. Yes, the Bible is clear that there is a genuine spiritual realm, but hat doesn’t include the dead returning as ghosts. It is certainly within God’s ability to send someone back with a message, as he may have done with Samuel. However, if this does happen, it is the exception rather than the rule.

So, we don’t need to be afraid of ghosts. Also, even though there are people who claim to be able to contact the spirits of the dead, they have no real power. In fact, we are commanded not to turn to these mediums and spiritists. (See  previous entry,  Christians and the Occult and Paranormal.) There are spiritual forces out to deceive and destroy us, as long as we rely on God, we have nothing to fear.

*Note: To be clear, when I use the terms “righteous” and “unrighteous” in relation to people’s eternal destination, I am not talking about a works-based righteousness. (Isaiah 64:6) I am referring to being declared righteous based on faith alone. (Romans 4:5)