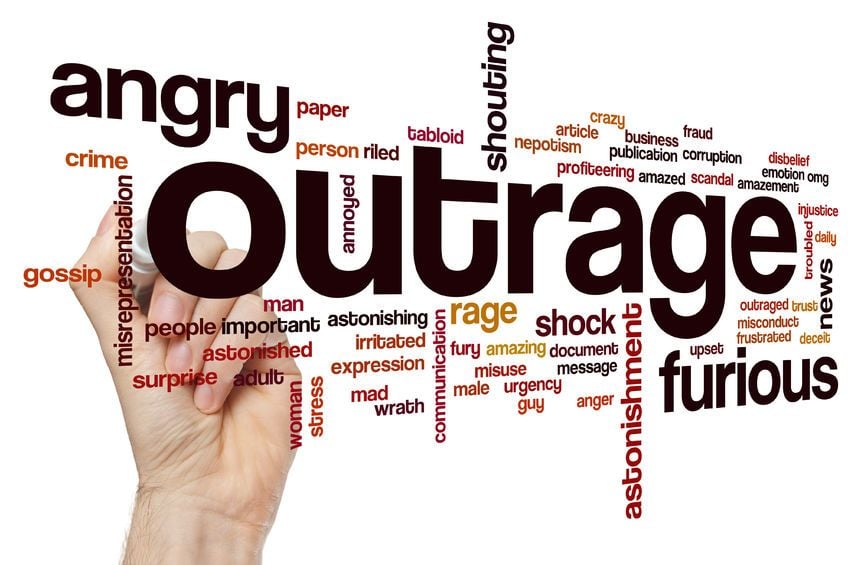 Though it isn’t the kind of thing I typically deal with here, I want to address a cultural issue, outrage. It’s everywhere in our culture. And it’s not a coincidence. It’s by design. There are a lot of people, entire industries even, who want you to be outraged, because that’s how they get their money and power. The news media want you outraged so you’ll tune in so they’ll have good ratings to keep their job and get paid more by their advertisers. Politicians want you outraged because it motivates you to get to the voting booth and give them power. Bloggers want you outraged so you’ll click through to their site so they’ll get ad impressions, which is how they make money. Lobbying groups want to keep you outraged, so you’ll vote their way, or put pressure on politicians.

The more outraged you are, the more money and power they get. So, they do all they can to keep you outraged. They spin the facts. Some simply lie. They craft headlines and social media posts to evoke emotional reaction. They divide us and turn issues into “us versus them.” They’ll even try to get you outraged about outrage. Remember how upset people were that some other people were upset about Starbucks red cups? (Want to know a secret? Those “other people” didn’t even exist. All the outrage about outrage was in reaction to one guy’s probably satirical video blog post.)

Tired of being manipulated into giving money and power to others? Then just stop it. It really is that simple. Once you learn to recognize it, don’t fall for it. Don’t take the bait. Never get outraged because someone tells you to. If an issue seems worth having an opinion about, do some research and find out what the facts really are. More often than not, I suspect you’ll find the situation isn’t as outrage-worthy as it was made out to be. Of course, there are situations where outrage is the appropriate response. When that’s the case, by all means go for it. But you’ll be doing it because of the facts of the situation, not because you’re being manipulated for someone else’s benefit.